Friday Post,  Senior Moment I left you with these words..

I return the A and Grab the B and even though when I went home The First Time, I told Bob I found a something I want and he said We do not NEED a...
To be Continued. 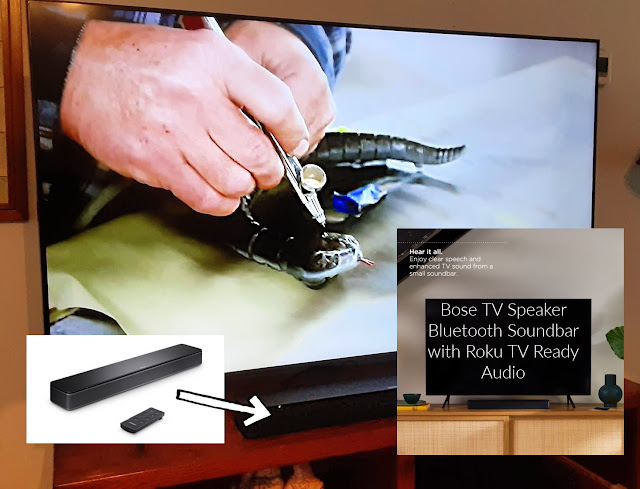 No, I did not buy a snake. The car show bob is watching, the mechanic built a mechanical snake to scare the other mechanic. KIDS!
The thing Bob said I should not buy was a
Bose TV Speaker Bluetooth Soundbar.
The Bose claim
HEAR IT ALL, clear Speech and enhanced TV sound from a small Bose Sound Bar.
You all know me well if you have guessed I BOUGHT IT ANYWAY.
The good part of this story, is while staring at it, a stranger man, who is IT specialist at the Local Lowes store, said that works really well, I have one and its so easy to use and blah blah blah
hook up to your cell phone, plays music really well, on and on. He said do you want to hear it?
of course said the Senior who did not see the THREE buttons that said TEST DRIVE.
It was soooo good. We stood there for 10 minutes with him selling it to me.
He said can you tell I work in a retail store?
I asked him if I could hook it up with HDMI and not Bluetooth and he said sure.
Remember the HDMI clue word until end of story.
I got all this info on my FIRST trip to Walmart.
I had to hunt down a store employee to ask if it was returnable if I used it and still could not understand the words when music played over.
An Aside here, why do they play music over people who are whispering to each other?
Just Sayin
I was assured I could bring it back if under 30 days.
I walked in the door, started to unbox it and sat down to read the instructions.
Bob said over the racket coming from the car show, I thought we decided not to get that. I said, yes YOU Did . I decided I want it and here it is..
During a commercial when allowed to speak, I said the thing is I have to go back to WM, it needs an HDMI cord. He said what is that?
I said, remember the SMART TV we bought and I had to go back and get the
HDMI cord? Same one. So why did I not ask if it had one and buy it while there.
I return to WM and buy the cord and spy new black rugs for the kitchen.
the 2 dollar each striped rugs I bought fell apart after 3 weeks and I keep catching my toes in the strings.
Enough about my senior moments. I managed to get it installed and working and it really does clear up the words.
for the first time ever I heard every word of every song they sung on American Idol, all the words they spoke AND all the words to the 5th installment of
Billy The Kid.... I do so love a Western. at least I can remember that
I put the stuff away and went in the computer room
Posted by MadSnapper at 12:30 AM

We have been wanting something like this, because Phil cannot hear the T.V. We have closed captioning, but not all the shows have it. I know there are some kind of earplugs, we were going to ask the computer people. Do you think this would work?

P.S. how much is it, and is it easy to install?

Phil reminded me that all our HDMI slots are in use, so I guess we cannot use it.

I'm so glad you bought it. Good for you!

I love reading your posts they sound just like it is in this house. I call myself Polly Parrot because II have to repeat every sentence to Tom.
Briony
Xx

Sounds like a winning purchase. No need here. TV isn't used but about an hour a day total. Except for movies/dvd

Hari OM
Good for you - did you fancy telly not have the Bluetooth option that you needed another wire? YAM xx

I need one of these. I absolutely hate when they play music while people are talking. What's the point in that?
I also hate when they sell a product that needs a cord of some kind but doesn't include that cord. I bought a heat press that needed a cord but it didn't come with one. Luckily I had one.

Bose makes a good product, Sandra, and we have a stereo and small bluetooth speaker. Do show a photo of your setup and also let us know the cost at WM.

Hello,
Sounds like a great purchase. My hubby uses the captions and headphones.
Take care, have a great day!

We are all the time complaining about the background sounds in shows! Also on some of the music shows, they have the music too loud for the contestant.

At least you got it installed and it works.

I think I would like that too! You are always finding neat gadgets to tempt us! lol

I love the way you write about your and Bob's back-and-forthing.
We're both technically illiterate (plus me, uninterested) to get one of these, but I'm SO glad you treated yourself! I'm beginning to think life's too fleeting to short-change ourselves.

A soundbar was an add on with your Samsung Smart TV
Amazing the difference in the TV speaker and the sound bar speaker. We really like it...however, it has a mind of it's own sometimes it just disappears reverting to TV speaker.
Of course easy enough to restore but WHY does it do that
Bryan has been watching Tales of Wells Fargo in GRIT tv
Hugs Cecilia

Hoor ray!! So glad you got it! Enjoy

I just copied this and sent it to Rick.
You are lucky to be able to talk during commercials.
My husband speeds through them and there is no talking!

Sounds like a worthwhile purchase. A good ending to this story.

Oh Sandra, I am so glad you bought that item for yourself. I, like Ann, also question that if an appliance needs a cord, why is it not in the same package? Thank you for your visits to my blog, Sandra. Have a great day. Jo

A bit of a hassle but I am so happy that all worked out for you. Enjoy!
I love American Idol.

You may have senior moments but I am so envious of your smarts, and yes, Courage in dealing with technology!

Yes that is a worthwhile purchase, we have one. I didn't know I could cast music to it from my phone!

neat gadget. I need one of these! so glad you purchased it.

Glad you bought it and I am impressed you can hook it all up.