Once Upon A Christmas Tree

Did a celebration around a Christmas tree on a bitter cold Christmas Eve at Trenton, New Jersey, turn the tide for Colonial forces in 1776? According to legend, Hessian mercenaries were so reminded of home by a candlelit evergreen tree that they abandoned their guardposts to eat, drink and be merry. Washington attacked that night and defeated them 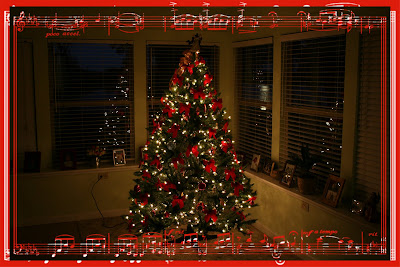 The Christmas tree tradition most likely came to the United States with Hessian troops during the American Revolution, or with German immigrants to Pennsylvania and Ohio, adds Robson.


But the custom spread slowly. The Puritans banned Christmas in New England. Even as late as 1851, a Cleveland minister nearly lost his job because he allowed a tree in his church. Schools in Boston stayed open on Christmas Day through 1870, and sometimes expelled students who stayed home. 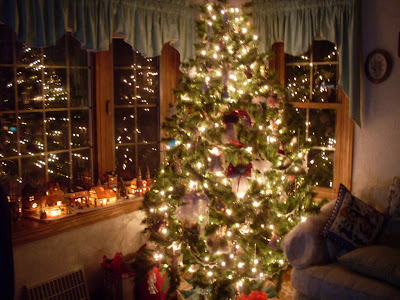 The Christmas tree market was born in 1851 when Catskill farmer Mark Carr hauled two ox sleds of evergreens into New York City and sold them all. By 1900, one in five American families had a Christmas tree, and 20 years later, the custom was nearly universal 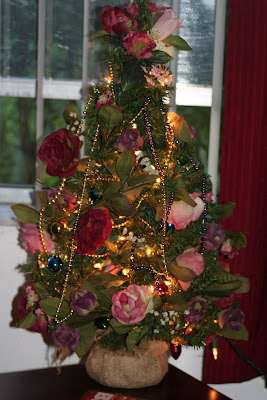 In 1841, Prince Albert (originally from Germany), husband of Queen Victoria, set up a Christmas tree at Windsor Castle in England. From the royal court, the custom of Christmas trees spread quickly to the middle class and then to working people. For Victorians, a good Christmas tree had to be six branches tall and be placed on a table covered with a white damask tablecloth. It was decorated with garlands, candies and paper flowers 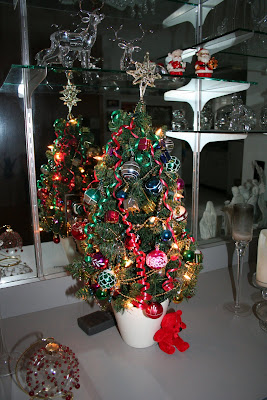 The Christmas tree is a mandala, a bundle of symbols showing what creation has to offer: light and the movement of angels, the gifts of orchard and field, forest and sea, all topped off by the star that pointed to the end of the journey, the place of peace. 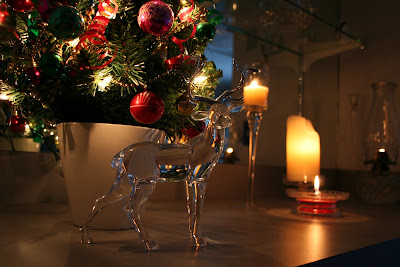 I'm honored to have my tree on your blog. I love the commentary about the history of Christmas trees.... blog is beautiful.
Carole

I love Christmas trees and these are all so beautiful. Great history too.
Merry Christmas!
Sunny :)

Interesting to see a lot of varieties of trees, and thanks for the stories as well. Merry Christmas!

Well, I love your new picture header. You should keep it up forever, even in summer!!! The trees are lovely. I recognize your little tree from your nook. But is the little tree of roses yours? I wish I had that one. The video has beautiful images!

I have two little trees, each year they change, last year this one had roses on it, this year it is the one in the nook. I put the smaller one that has the white bottom on the table in red and green. these little trees are last year pictures. they are entirely differenct this year.

Lovely. I love your header photo.

We are also honored to have our tree on your blog. Love the history. Love the video. Love Celine. Love you! Merry Christmas!

I am sorry I have missed several of your wonderful posts. It seems to me there is never enough time to catch up with all the posts of my blogging friends.
This post is wonderful. I love all the photos that you posted as well as your writing. All the Christmas trees are so beautiful and festive and so lovely decorated. But the tree on the second photo attracted me the most. There is so warmth in it and it makes me feel very comfortable while looking at it.
I love Celine Dion very much and very much enjoy listening to her lovely songs.
Merry Christmas!

I am sorry I forgot to tell you that your new header is really lovely. :-)

Hi Friend, Love the pictures of the Christmas trees --including yours. Love your header also..

AND--it's been a long time since I read about the 'Histoy' of the Christmas tree. Thanks for the reminders...

Hope you and Bob have a wonderful Christmas.

Your new header photo is gorgeous Sandra, I really like it. Interesting history of the Christmas tree, could one have affected the outcome of the war.

Hope you and your family have a very Merry Christmas,
Judy