Photos today taken at my 64th birthday bash at Heritage Park Nursing and Rehab. No pictures exist of the 50th Birthday party that is the subject of todays post. 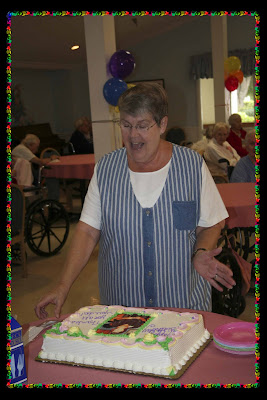 On Sept. 5th, on the occasion of my 50th Birthday, which was 15 years ago, my friends, Eunice, Kathy, Bev also known as Lacoochee Kid, and Peg, made  arrangements to buy my breakfast. I arrived at Peaches, the local place to be for breakfast, to find the table decked in hovering black balloons with appropriate over the hill signs/remarks and 4 friends laughing faces. PLUS all the laughing/smiling faces in the restaurant of people we did not know. Not one of us knew on that day that we would become  charter members of the Ugly and Unwanted club. 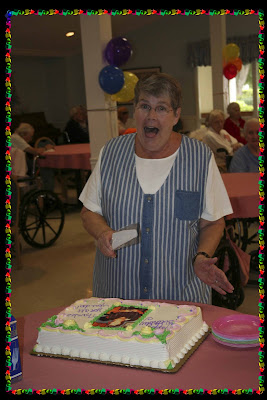 First let me advise you that my son states I have a black belt in conversation. translation - Mom Talks To Much and often opens mouth,inserts foot. No, I did not hit him when he said it, Truth is Truth. You also need to know I had been active in an Overcomers Meeting for people with addictions at our church for several years. 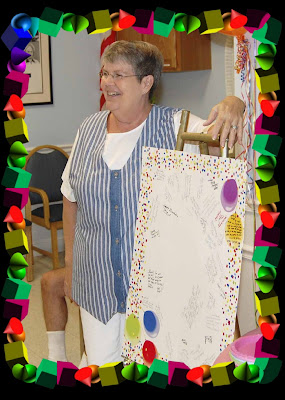 We laughed and talked and decided to meet for breakfast once a month on Saturday morning. Three months later we met  for the December  at The Beach Cafe, to have breakfast on the back porch looking at the beautiful gulf beach (remember we live in Florida, so we can do that). 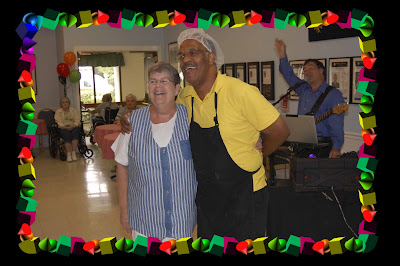 During this meeting my black belt kicked into gear and I made the statement  that might heart always draws me to the ugly and unwanted, whether it be people or dogs. Hysterical laughter and tons of teasing later over the fact THEY were ugly and unwanted, we decided to name our selves the Ugly and Unwanted Club. You might think this would be The End of The Story. NOT 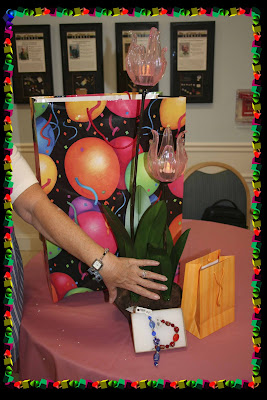 A few days later,our Pastor told his wife someone in our church had complained to him that there was a new club in the church and it was called the Ugly and Unwanted club and that he felt that was not appropriate for a church club. He asked Peg if she knew anything about it.
Peg sheepishly admitted she did know about it and that she was a member.
She explained how the whole thing started and that it was not a part of the church, just friends having fun. Pastor Said: "please can you name it something else?" and so to keep the peace, we became the U. G. A. U. club. We all new in our hearts we were Charter Members of The Ugly and Unwanted, but could no longer say it out loud.
This story in memory of our friend Eunice Bianco, the instigator of that first breakfast and our sadly missed friend.


And thanks to Bev, Lachoohee Kid for reminding me of it last week.
Posted by Sandra at 6:13 AM

I have enjoyed telling that story to people all over. That was a very special group. I wish we were still together. I wonder if we can find a table when we get to heaven to meet.

I love this story1 It was a nice surprise to find it on your blog today. On Bev's last visit, we spent a lovely evening at our house, and it was then that she told me this story. It sounded like such a fun group. Why did it disband? Are there not many left?

Cute story, Sandra, but it's too bad that your church decided to get involved. As you said, you all know what your 'real' name is.... Cute-cute-cute.

I also have a 50th birthday story--and I DO have pictures... I'll do a blog someday about that... I also received the black balloon and cake treatment...

Cute pictures of your 64th birthday... Wish you had pictures of the 50th one also...
Hugs,
Betsy

Good story about your 50th birthday!
Makes me think of Sandra, Ernie, Patsy and me. We have been blessed to be able to come together in friendship for over 23 years. We all got teary at our last get-together. When Ernie was asking the blessing and she gave thanks to the Lord that our friendship has remained so close for all these years. It is good to have friends that you have been through a lot with and you know will always be there for you. You and I have maintained our friendship for 50 years and we are as close today as we have ever been. I am thankful for you as my good friend and my Sista. Love you.

Great story about you 50th, only really good friends could come up with a club like that. I'm sure Eunice would be proud that the story of the club, and her part in it. is still being told.

What a wonderful story and thank you for sharing the photos. Happy Birthday!

Not matter what club you belong to, you are not ugly or unwanted!