continued from prior post yesterday
I stepped in the door and told Albert Bob, I have a chair in the car.
WHAT? what kind of chair?
The one that is replacing that chair, pointing to the 100 pound rocker, says Costello Sandra
How did you get it in the car?
I didn't, 2 old men and an old lady put it in.
Albert starts throwing out questions
How do you think we can get that rocker out to the curb? it weighs 100 lbs.
How will we get the new chair in the house?
Cotello said, well come out and look at it, as I was struggling to drag the rocking rocker chair out of the spot in order to clean years of dust and dirty because we could not move it to vacuum.
He grabs it by the arms as I scream Wait It Rocks when you pick it up!
to late, it rocked a hole in his shin bone.
Albert grits his teeth, his face turns red, as he manhandles it to the middle of the floor, grabs it by the arms and staggers ON HIS NEW KNEE to the front door screaming kindly asking me to open the door.
Costello is yelling you can't carry it that far, PUT IT DOWN!
Beau STAY, BEAU STAY, the door is wide open.
Albert yells he will not go anywhere
Costello yells, HE WILL if the Door is open.
The Chair is on the front porch, the curb is 75 feet away, Albert and Costello are weak and old .
Costello says we need to lock the rocker, then we can each take a side.
Albert yells we need a stick to lock it.
Costello heads for the garage and Albert is yelling where are you going?
Costello comes back Waving The Mop.
Albert yells, push it through the slot. Costello Does that
Albert Yells NOT THAT ONE, the other one
Costello says What other one?
Finally it is locked and can't rock.
Each of us grabs both hands on the end of the mop, and lift, not to bad mumbles Costello.
We stutter step SLOWLY groaning and moaning and finally sit i down at he curb.
Costello goes in the house while Albert screams WHERE ARE YOU GOING NOW?
I come back out with the rocking foot stool that has been in the closet so long he forgot it was there. Since he never gets his clothing from the closet he hasn't seen it. He prefers his clothing on chairs and door knobs.
Costello receives a matching bruise to her shin bone from the rocking foot stool.
The NEW chair is still in the car.
Albert Mumbles, we will never get it out, we will never get it in the house
Costello yells we CAN it doesn't weigh as much as the other one,
We wrangle it down onto the driveway and each pick up one arm and slowly walk it in the house and sit it down in the spot. I start moving it around, moving the table,
Albert says what are you doing, it is sitting where the other one was.
Costello says, I have to decide if I like it slanted or want i straight!
He says it does't matter it is where the other one was.
I say it MATTERS TO ME because it will Bother Me if I don't like where it is.
I finally sit in it and demostrate it swivels 380 degrees, demonstrate how I can sit with phone or chromebook on lap and he says are you going to tell me how much it cost?
YES!!!!! FORTY DOLLARS
he says FORDY DOLLARS? I said a new one starts at ONE THOUSAND AND TWENTY ONE!
I paid more for Beaus new Kong Bed than this chair!
He said WHAT????? he has no idea what the KONG bed costs and never will.
His last question is why did you want that one..
Here you go, I bet most of you can guess why THIS ONE? 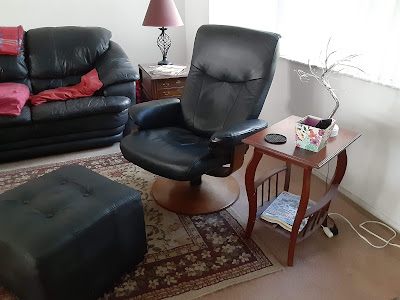 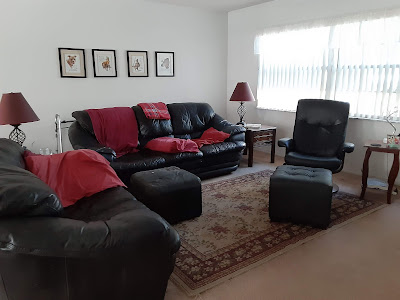 Of course you guessed. It Matches. I it black leather and wood, as is everything in the living room, it's comfy and swivels and it since it is not new, but old new, it fits in with our old furniture.

I did not tell him I have been researching the cost of sectionals with chaise on line..... 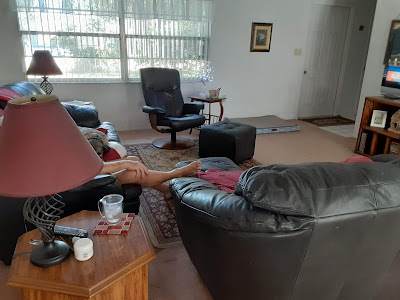 This would make an excellent sitcom. Better even than the Friends episode of them trying to get a couch upstairs. Of course I knew that it matches, and looks new as well. So was he in pain afterward, with the new knee?

I love the chair. Sorry it was such a hassle. 😕

I was with you all the way there. It used to be like that for us but Tom can't do anything now so it's me on my own or I have to get one of the kids to give me a hand.
I've been thinking of getting one of those chairs for my bedroom.
Briony
x

Your new chair matches perfectly, what a great find. I had to laugh about getting the chair in and out of the car, hubby and I have done things like that. Enjoy the new chair. Have a great day!

It really was worth it all...it looks so comfy. I wish I had an upscale thrift store to.visit.

Along the same lines as Ginny’s comment, you should send these into a favorite sitcom. You did make me smile and your new chair is perfect and a great match to your other furniture. I am looking forward to when you buy a sectional with chaise ;)

Hari OM
...and one more positive - you can vacuum under it and over the pedestal!!! It does look fab. YAM xx

That was serious work, but still all in all serious humor too. Couldn't help it 'cause it reminded me of the two of us.

TOO FUNNY! I was dying when the evil rocker tried getting its last licks on Bob's shin. Mop to the rescue!
Anytime I move a piece of furniture, hang a picture, etc., etc. I have to take 50 steps back and visualize -- several times until it looks right. Drives Tom crazy.

Now inquiring minds want to know -- how long did the evil rocker stay at the curb? Wouldn't you have loved to watch the struggle when someone stopped to pick it up?

I have said this before, but it sure sounds how Sandie and Rick work together. Teehee. Glad you finally got it done and it worked out. So did someone get the old one yet?

Hello Sandra,:=) You make serious work sound so comical, I couldn't help laughing I could imagine the great struggle you had to get it indoors, and the old one on the curb. It looks just perfect in your sitting room, ...and of course it's important to get it facing the right way!:=) Now I know why you were so excited when you first saw your new chair,..it matches your other furniture brilliantly. Enjoy!

Sitcom for sure...
So glad it finally made it to the curb..sorry you both got shin ouchies.
The new chair is perfect for your room and you will be so comfy in it...
Beau was probably shaking his head at you two the whole time.
Sue

Abbott and Costello? More like I Love Lucy, you are so funny and zany! I "saw" it all just like in a sitcom - and laughed and laughed. So many literally hilarious quips in there - I noticed the little jab about hubby preferring his clothes be on doorknobs and chairs than in the closet! ha ha too true.

Yep it matches...duh Albert
Beau I sure do wish you knew how to work a video that would have been a most amusing movie.
Hugs cecilia

I'm picturing this whole thing and would make for quite a comedy act. The new chair does look perfect in your living room.
I absolutely love my couch with the lounge on one end.

I played that entire scene out right along as I read! With hrimaces, groans and all manner of facial expressions!!!
LOVE your new old chair! My favorite kind!

And now we get the "rest of the story". We are happy you got your new old chair inside without too much harm, but PLEASE don't do that again!!!

Just a short note.."Welcome to my World"

It looks very updated and smart in that room. How long before the one on the curb was gone?
Sorry it had to be such a painful struggle.
On Sept.21 I tripped on a chair and fell very hard on the ceramic tiles in a weird way causing multiple fractures to my left arm. Aging is such a balancing drama of good times and painful ones.

Sorry about your shin bones. The new chair looks great. So glad you bought it. It matches so well. I do like the mission style of the old one that you put in the street. What an ordeal!!! 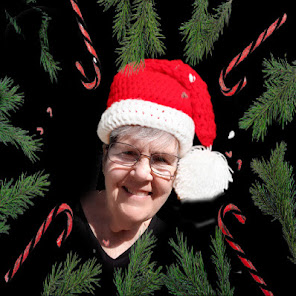