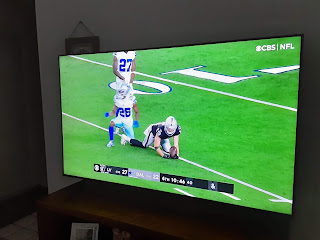 Thanksgiving Day, the turkey was not the only thing that was fried,
to turn our old TV on and off required plug and unplug, Bob Sighed.
5 AN Black Friday morning
we were surprised even though we had a warning
Plug/Unplug over and over shaking his head,
the ancient TV was Dead, Dead, Dead.
That day was the worse day it could be,
The Dallas Cowboy Game that was trapped in the DVR, Alas the game he could not SEE.
We needed to go to the Black Friday Sale,
Bob with his knee, was walking frail.
But the day was right, all TVs on Sale.
We pushed and pulled and tugged and cursed
Getting   that giant 55-inch Samsung on the basket, was just the worst.
We stumbled around to the self-check-out we went,
bob could hardly walk; he was truly spent.
We staggered and pushed and tugged and rolled, really far
that big old TV to the back of the car
The door was up, the hole was small,
we could not lift it in at all.
Bob's words were heard, by a store employee,
how could he not hear and see?
the two old people, one with a bad knee.
He tried to help; he really did.
No matter what he did, he could not close the lid.
I said the back seat needs to be released,
ha ha ha we could not get the dog cover unleashed.
We bought the Kia in 2015
that was the last time the mechanics were seen.
No memory we had of how to fold it down
Bob was saying more than just a frown
We finally got the flat,
TV inside, door down, we thought that was that.
I pulled in the garage, we lifted that door,
we dragged that heavy TV on to the floor,
We pushed and tugged and tugged some more until we got it inside the living room door.
There sat the ancient TV, that weighed a ton more.
We dragged it to the front porch, thinking of the chair we put at the curb,
no way to get this out there, we were really disturbed.
Did I tell you the city charged us 10.86 cents?
when they lifted it and to the dump it was sent.
There is much more, but will just let you know,
It was 5 hours no less and not any more
We fought that SMART TV, and each other,
we just needed help, like from a brother.
It works really well, but what the hell,
The movies on Prime, will not zoom out
we feel like we are watching through a bunker looking out.
Next day I did call all the way to India, to Samsung Support.
He said to fix it required factory reset. What a sport.
alas the reset, put it back to default
I had to set it up again, yes, we fought.
The punch line is, we love the TV
but after all this, the movies we can still not see
except like through a bunker,
The cable remote works fine on TV,
the movies we can really well see,
Its the streaming movies will not fill the screen, OH ME
PS a lot of the five hours we spent were due to 11 years of dust and cobwebs because the old TV had not been moved in 11 years.
It was too heavy to be moved to clean, but not to heavy when the TV could not be seen.
Dust and Dirty and 6 modules of things we never use had to be disconnected. I got so choked while doing all this I had to go outside to cough until I almost threw up.
On the Good side We are thankful we had the money to get a new one,
Thankful the dust is gone for another few years
And in the FUTURE, I might be thankful for a
SMART TV that right now is smarter than me
Posted by MadSnapper at 12:30 AM

Good GRIEF, what an ordeal!!! It's a wonder you both didn't wake up the next morning with bad backs. I love how your story rhymes. I was so involved in reading all about it at frst that I didn't even notice. So then went back and started over. You are so great at tech, I KNOW you can fix the streaming!! Maybe call your cable or satellite provider?

How did the old TV know it was Black Friday? (If we were conspiracy theorists we could start a story that its burn-out was programmed into it.)
We laughed at your tale in rhyme but not at the fact tge store left you guys to deal with it on your own.

oh fortunately it was black friday... my mom lost her freezer the weekend after and has to pay an insane price now, worst timing ever... I had such a car-tastrophe with a carpet once. me and a friend tried to get it in the car, but the darned beast was stubborn, neither through the doors, nor through the trunk, we worked like horses and with seats down, sets up... . a guy came and said we are the most idiotic chicks he ever saw... I gave him some swear words, because that is very rude to call us idiots... he pointed at my car top, then at his head to flip we a berd and then I saw it... I had a convertible that time... oh man!

What an ordeal that was. I have the same problem when I buy anything big. Getting it to the car and then from the car to the house is a struggle. I'm glad it's finally in place and you don't have to worry about it.

Hello,
What a hassle, but at least it happened on Black Friday. The old TV's are very heavy, we have one in our basement an old Sony that hubby still watches. The new Smart TV's are nice, they are much thinner and lighter too. I hope you get the Prime movies working correctly. You are a great story teller. Have a happy day!

We bought a 55" smart tv too. Our only problem was I forgot where I parked the car!!!

Oh, inache just thinking about all you went through. If you figure out about the streaming size, be sure to tell us how you fixed it.

Hari OM
...I'll stick with my 32" not-so-smart screen that I hook up with HDMI from Voovoo the Vaio whenever I want to 'stream' anything. Is it happening with absolutely every film? It might depend on whether HDTV production or not. Letterboxed items are usually of a 'certain age' and will always be adjusted so that the entire image can appear on the screen... YAM xx

Oh you'll love it now that it is finally there! What an ordeal! Old tvs are even harder to get rid of though. Lots of luck...and I mean that sincerely! Enjoy your day!

GOOD GRIEF OR BAD GRIEF!!!!!!!!!!!!!
How is Bob going to get his other knee done when he can barely walk with the new one?
Congrats on the new tv you will learn to love it.

This is worse than I imagined! Thankfully, when we got ours Tom corraled a Target employee -- who not only sat it atop a rolling cart, but walked it outside and into the truck.

I wonder why businesses haven't considered the viability of offering a delivery-and-set-up service. Fee-based, of course. My mind literally boggles, imagining how many people who are physically or mentally (like me) unable to do this.

Our TV are our entertainment now a days.
I'm glad you got the new one before Bob's 2nd knee surgery
Hugs Cecilia

I feel your pain and frustration! Our new Internet and TV equipment arrived in a big box yesterday. It says self installation will take 10 minutes! More like 10 HOURS if we tried to do it so I’m leaving the boxes unopened until Summer or Pam can come over! I haven’t canceled the old service yet and I won’t until the new one is up and running!

Yikes...what an adventure...
Love your story telling though.
Wow, Poor Bob and his knee..glad he will have the new tv for his recoup time after surgery. Hope you can figure out how to get the streaming working...Me??I haven't a clue...
Sue

Even having had the MOST FRUSTRATING DAY EVER, you still told your story with humor!

Glad you finally got it working.

Time for Both OF You to get some HELP - there are bound to be organisations that help old geezers like you Both :-)

sometimes a "sale" is not truly the right place - rather a store that has "service" even if it's a bit more cost.

That was quite the TV buying saga and glad the TV is now in your home, Sandra. They are getting so big that it's a wonder anyone can fit the box into their vehicle. Several large TVs have been delivered to the package room here in recent weeks, tis the season for new things. Hopefully, you will be able to get your new one one set up the way you want it.

I felt exhausted just reading this and everything you went through. It's awesome to have a new TV. I hope you can figure out your streaming movies. We've never had that issue but there has to be a solution!

We have had our smart TV for 6 years since November. Got it at Costco.We have the smart hub on TV connected to WiFi and all works well. We can even get music from the TunedIn app. The apps have to be set up one by one . Lots to do at first. We got a special remote. Sadly the remote company is no longer as Smart phones can now be used as remote .
What a Thanksgiving at your end. I wish you good times.

Good grief! I feel for you. I hope you can get the movies to fit the screen soon.