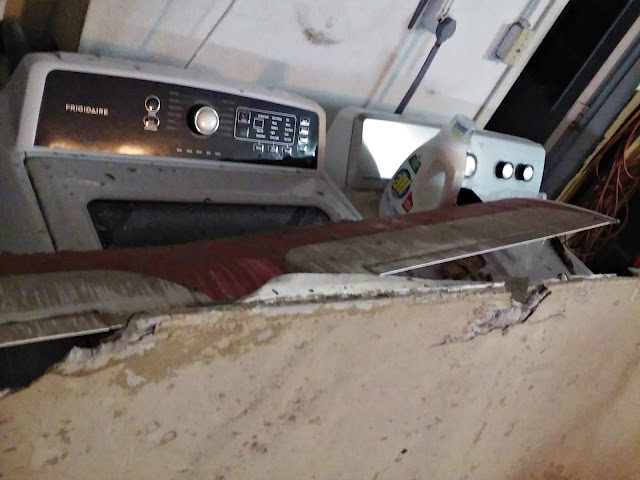 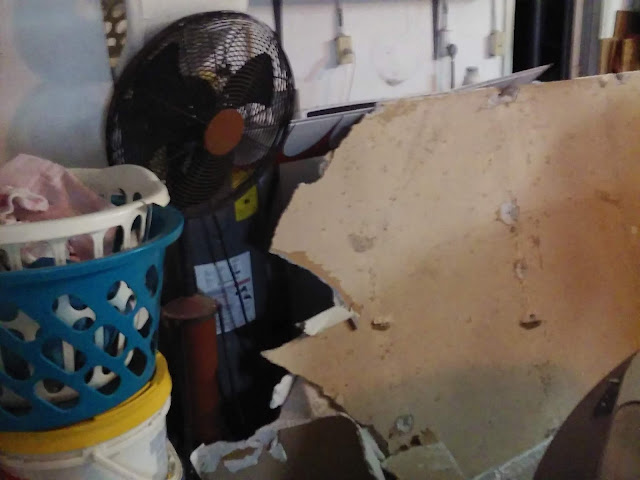 I turned and yelled in the door. COME HERE! Sheetrock is Down. During the storm filled night, a whole sheet fell from the garage ceiling onto the washer/dryer. Nothing was damaged but what a mess.  It seems when they named it Sheetrock, they meant it is literally a sheet of rock. The thing weighed at least 100 pounds. 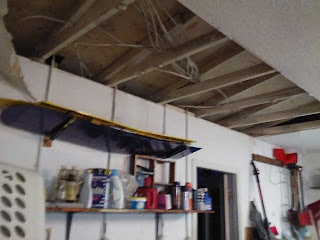 As we worked for over an hour cleaning up the mess, we tried to figure out why it just fell. no leaks nothing wrong, it just fell.
Bob and I stood it on end, he held the back side 2 inches off the ground, I could not lift my end, but was able to drag it out to the curb, leaving a long white mark on the driveway. We broke it up and put the pieces in the big trash receptacle.
With brush and dust pan, I cleaned off washer/dryer/water heater and resorted to a paint brush to get the stuff out of the small spaces while bob swept the floors.
All day long we talked about WHY?
2 days later I remembered The 180 pound Plumber on the roof with the 100 pound Snake and that the snake was stuck and for over an hour he rattled the house and foundation AND roof trying to get it out.
At least now we know WHY...
below the red shape over the washer is the vent pipe to washer, the one in the corner is to the drains and the one the snake was Stuck In...Imagine a giant blender shaking the roof and foundations and there you have the answer....
On the good news side. we found it when I went out to put poop in my car..
Just so you know, Big Boy had a Vet appointment at 9 am which requires a SAMPLE to be tested and since in the past I have been known to Leave It On the Counter, I wanted to put it in the car
Yes! it was sealed in a baggie. I did remember that. 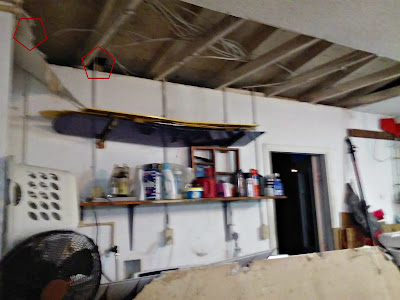 PS.. I know I need to shorten my posts verbiage... it is just not the same.


Garage sheetrock fell on washer/dryer
Made a huge heavy mess
We cleaned it up
Nothing was damaged, Roof is fine.
Caused by shake, rattle and roll of Plumbers Snake 3 days before.

Your edited version is NO good, or interesting. I love the way you tell stories, so let's keep it that way! Your words and stories are always charming, interesting, or funny. When will you get it repaired?

Oh dear, what a horrible mess. And the plumber did it ;) Maybe you'd better get him back to help fix this. I agree with Ginny, love how you weave a tale.

Hari Om
Bullet points are fine for facts - no good for stories!!! YAM xx (BTW, the name of Sheetrock is actually proprietary for one form of plasterboard... and it is derived from the fact that is was originally pressed gypsum... which - wait for it - is a mineral and therefore a 'rock'! but you knew that, right?)

Oh no. Good thing that didn't fall while you were standing there doing laundry.
You had me concerend for a second when you said you put poop in your car...lol
I don't think you need to shorten anything in your posts. I like the way you write them and Ginny said it perfectly.

I'd say no...no to less words! I would prefer to read more. Along with photos of course.

On the brighter side of it all, the entire ceiling could've dropped. And a lot more damage AND work.

I am glad no one was standing there when it fell. Sheetrock is heavy, I have watched my son hang it up! You do not have to shorten your post, I like the way your tell your stories. Have a great day!

This is the kind of story that calls for mire words! And I will always and forever have a different image in mind when I hear the term shake, rattle, and roll.

The 2nd version of the post works for a headline. Then the reader (the rest of us) still need the whole story.

I hope none of the other 'sheets' are loose.

My goodness...it's always something, isn't it! At least you figured out why it happened. I like the details! Glad you hubby is so strong! Hugs!

Noooooooooooooooooooooo do not shorten your verbiage...you always intrigue and delight me. Wow why is it solving one problem creates another? But of course the plumbing had to be done so thankful nothing was damaged in the garage.
When I read put the poop in the car I almost fell out of the chair...
Hugs Cecilia

YIKES!!! Thank God, it wasn't your bedroom where the sheetrock caved! Giggling about the poop. When we had the girls to the vet last month they were unable to 'retrieve' a fecal sample from Macie and sent us home with a little vial. Go figure, she didn't make #2 during the day (their same-day business hours) for a week and a half.

PLEASE don't lose your authentic voice. I'm happy to have left all that behind in the corporate world.

You are definitely fortunate that nothing was damaged or that you were not standing there when it fell. It is never fun cleaning up a mess like that but you have a lot to be thankful for.

What a mess! My first thought was a leak somewhere and that would have been even worse.

That's definitely not a fun thing to wake up to in the morning! So glad no one was hurt!

Your Saga is so much better than the edited version.
If you did the edited version I would think something was wrong...or maybe Bob wrote it...HaHa...
Oh my you just have one adventure after another don't you.
Glad nothing was damaged and that you figured out how it happened.
LOVE YOUR VERBIAGE!!

It's your way with details and words that stir strong reactions in me and keep me wondering what adventure is next. My vote is for the first version. Keep 'em coming.

I think that is the exact reason!

I laughed when you said you found it when you went,"to put poop in my car."

It’s always good to know why!