The Girl on The Train..Final Friday Fiction 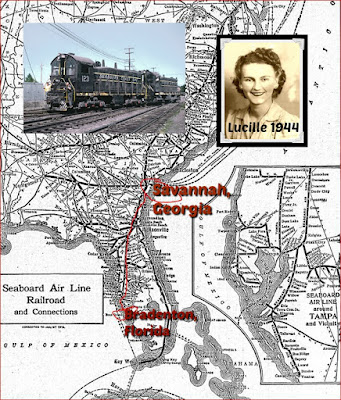 Mid-Summer, 1943, WWII rages on. The Seaboard Champion train, is leaving Savannah, Georgia, with a long track ending in Bradenton, Florida, 10 hours of clacking and rocking wheels along the track.

17 year old Lucille, sits huddled in the seat beside her stone-faced, angry mother.  Her sobs keep time with the clackety clack of the rails as she sobs quietly. Her eyes do not register on any of the  handsome young sailors, in their bright white uniforms and sailor hats.

Her mother, Alva, hisses in her ear, Stop Crying! you are 17 years old, Charlie is 29, you are not going to marry Charlie.

The train finally reaches the train depot in Bradenton, and grabbing Lucille by the hand her mother drags her off the train and  marches her down the street to their home in Palmetto.

Summer passes slowly for Lucille, her heart is breaking for love of  Charlie.

The date is Sept 21, 1943, tomorrow Cille will be 18. She waits as the train from Savannah pulls into the Bradenton Depot and a handsome man, with black Irish curls, steps down into the railway station. She leaps into his arms and he assures her we will be married tomorrow. You will be 18 and she can't stop us.

Charlie gives Cille's mother the ultimatum. We are getting married at the courthouse tomorrow, you can be there or not, its your choice.

The next day, September 22, 1943, Charlie and Cille walk into the courthouse to be married. Cille is wearing a pale blue suit, Charlie a Navy blue suit. Alva watches as her 18 year old daughter pledges the rest of her life to the man who will be 30 in 3 weeks, and as they walk to the train to leave for Savannah, her parting words are  This Will NEVER work!

Charlie and Ceil wave out the window as they sway to the rocking Seaboard Champion taking them to Savannah and the rest of their lives. They did live happily ever after until death did they part.

Lucille was my mother, and Charlie my Dad. It did work, they lived happily together until my mother died in 1990. Daddy loved her until he died in 2006.

Over the years of my life, my Grandmother Alva, continued to say the marriage will never work. After a few years it became the family joke.

My Grandmother always regretted she let my mother ride the train to Savannah to stay in the boarding house where my Grandfather was staying while worked in the CCC camps. Charlie stayed in that same boarding house. The two of them met on the steps, while sitting outside enduring the hot Sept heat. It Worked! My brother and I are living proof! 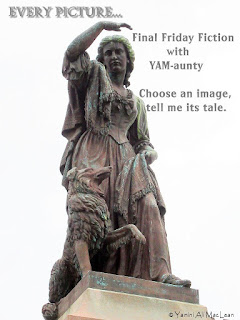 I just KNEW this was your Mom & Dad, from the very start! What a story!! And I loved every minute of it. Now, about your grandmother. Once they were married, you would think she would have wanted it to work out!! I guess she just never liked him. Sad.

More! We want MORE! What happened? How did the relationships go?
This is fascinating! We want to know MORE of the story!

Hubby and I watch many a television travel and history documentary about America, especially about the railroad. Love the map, photos and, of course, the personal story of your Mom and Dad. Love the detail and the way you write. More please! Hope you, Bob and BB have a good weekend.

What a great story …
I'm going to say too … More! We want MORE!
I really like how you wrote your parents' story!
Wishing you and your boys (Bob and BB) a nice weekend!
P.S. I hope you have forgiven me for the mistake I made yesterday!

It would seem that we often do not like the partners that our kids choose. Sometimes we are right bit mostly they turn out okay. Maybe fate knows better than us.
You may have the makings of a story teller Sandra. lol
Briony
x

Hari OM
Sandra, this is gorgeous!!! I am welling up here... both for the way you gave us this love tale of truth... and for joining in with the spirit of FFF!!! Love and Blessings, YAM xx

What a wonderful story. My grandmother was 12 years younger than my grandmother and they were married until death seperated them.

What a wonderful love story. You are a great story teller. I like the photo of the map with the little photo of your mother. They had a happily ever after.. Enjoy your day!

This was an exceptional love story! Maybe a continuation of their lives next week?

Sandra this is absolutely the most romantic story I have ever read and your words painted such a picture for my mind's eye. Age is truly just a number.
Marriage is about love, respect for each other.
WELL DONE clapping loudly
Cecilia

Applauding in Alabama!!!
YOU, my friend are an author. If this were a prologue of a book, I'd buy it!

Oh my gosh - let's say gosh bumps!!!!!!!!!!!!!! What a beautiful love story. Hope that Andy and Shaye have one - they are so young, but so in love! Glad they got together because you are here!

What a wonderful story...that it is true makes it even better.

Wonderful story and the fact that it's true makes it even better.

Great story. Living proof for sure.I realized a couple of comments ago that I was on your other blog...haha

Hmmm...when I tried to post my comment it said there was an error and to try again..
So
Here' goes..
You, Sandra are a Master Story-teller...
More please..!!
I love that this True Love story is True too.

What a wonderful story Sandra, and beautifully written!!