The Sun in Florida at this time of year is deadly and bright and right on top of our heads. This is the time of the year it comes in the bedroom and bathroom windows. You may have seen in the past I have used cardboard and beach towels to drape on the curtains to block the sun.
I decided I wanted black out curtains on one window in our Master. Since they would only hang there for 3 or 4 months, I was reluctant to buy them.
While watching a movie I sat looking at those burgundy curtains and thought I have hated them since the day I hung them a few years ago. The sun never comes in that window.
BINGO!
Use them to black out the bedroom sun. Buy new sheer valances because we loved it when they were up there for many years, and now reside in the kitchen window.
Ding Dong! Amazon is Here.
OH MY WORD!  you might think two adults could simply lift the rods down, remove the red ugly stuff and add the white pretty stuff!
NOTHING IS SIMPLE here
Bob living in his World of Television, saw me drag the stool over to the curtain closest to the TV and step up and FAIL to lift down the rod.
It is 108 inches long, hooked in the middle and has not been moved since they day I hung them.
He remarks What are you doing?
OMW! what did he think I was doing, did he not wonder what came from Amazon?
I say I bought new sheers, that is what just came from Amazon. He says what's wrong with those?
Remember he said that until the end of the tale.
He says get down I can do it.
HOLD your end he says
I AM holding my end, it is hung on the middle support hook, he is holding the other end, The Dog can't unhook the middle, one of us has to move to the middle, I move and can't reach the hook. I drag the stool to the middle, climb up and unhook and yell, Wait give me time to get back to the other end as I fell over the ottoman getting there.
We finally get the thing down and it is STUCK together and will not come apart. I drag/carry it to the kitchen bar stools and hang it across, the red curtains caused HBO words because they were seeminly glued to the rod. 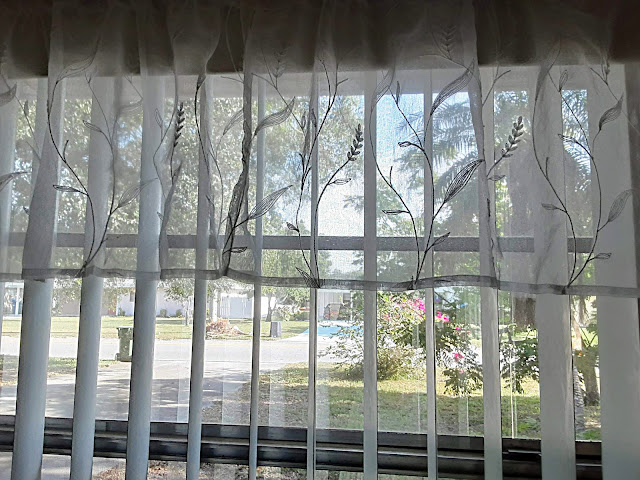 they are sheers and there are three to thread on the 108 inch rod.
We then hang it up, with both of us using WORDS loudly, because I am 2 inches to short to do my end and have to drag that stool around.
Its UP. 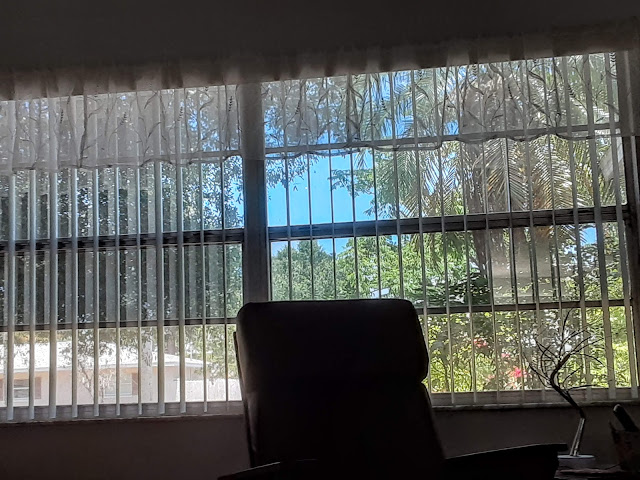 Now we have Wide Screen View of not only the house of 7 cars, but 4 other houses. 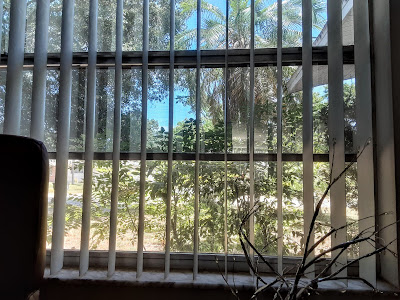 Its up. We brought the outside inside and We both love it, he says I hated those curtains, (remember he said what is wrong with those)
I said I hated them since I bought them.
Every time we sit down or walk through the room, we both say over and over,
Look how bright it is. The room is wider and longer. What a difference, We should have done this long ago. WE???
Problem 1. We still have to hang the curtains in the bedroom
Problem 2. He doesn't know I have ordered one more valance because it needs more fullness.
Problem 3. today the valance comes and we start over adding another one
Problem 4. NOW I can see the dust OMW!
😛 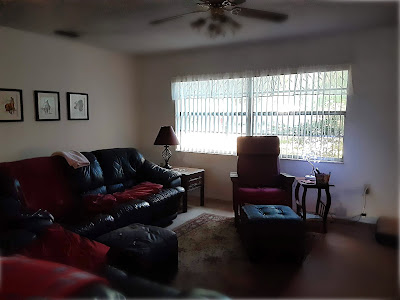 to be continued
Posted by MadSnapper at 12:30 AM

Your new curtains look really pretty. It is a pain to get old curtains down. I am looking at a couple of windows here I would like to change.

It looks so light and pretty! The drapes looked a bit like in a funeral parlour. And you were right, it did need a bit more fullness. You will still hate them when they are in the bedroom, but at least they will keep the hot light out. And you will have your eyes closed...I need a set of sheers for our middle bedroom. We have had ours up for so long that they just rotted and tore in half!

The new ones look great! Good luck putting the old ones up. That's a real pain.

it looks just fantabulous!!!!! I love it....and you can keep an eye on da hood and the cars now, pawfect!!!

What an ordeal to get the old ones down and the new ones up. They sure do look great though. I like the white better than the red. It makes a big difference.

Hari OM
The light is great - and somehow the room looks twice the size! YAM xx

I truly love the new look!...dust and all.

I love the new light and bright curtains. We have one long curtain rod in our living room, it is hard to change the curtains. Your new curtains look great. Have a happy day!

Everything always has to be such a chore it seems. Love the new look!

I love those! I wish I could have just sheers but Roger would have a cow. He would live without ever opening the curtains. And I would live with them all wide open. So I have one open in the living room of the day, till in the afternoon and he shuts it never to be open. and I so like to sit and see outside.

I love them - really changes up the place.

Wow -- what a difference something simple like changing the window treatment makes! Love the subtle design, too.

Your and Bob's 'conversation' makes me smile and nod. A few months ago I bought sheers to cover the blinds and thought, 'easy peasy.' WRONG. Tom was in charge of placing the tension rod (behind the cornice) and we went round and round deciding just how high he should go. Dictionary words, yessss. It looked like a little kid wearing trousers his legs had outgrown. When he left, I got on the stool and lowered the rod myself. Not sure he's even noticed.

It does look so clean and bright and nice! I'm glad Bob was close by to lend a helping hand! And sometimes it takes LOTS of those words to get a job done! hahahaha! Enjoy your day. Hugs to you both!

I cackled at "What are you doing". I would have been so tempted to say
'eating a banana you want a bit"! Never said it but Oh have I wanted to!
I love the sheers and the delicate pattern. Good luck with the bedroom and the other one for the family room.
Hugs Cecilia

A bit concerned for the two rod wranglers’ safety, but the results are perfect. All is well and that gives me permission to laugh and laugh. Awaiting next installment!

Your tales of every adventure are my entertainment for the day.
The shears look terrific and really do brighten and enlongate the room.
Bob is so funny..(my opinion). He sure keeps you on your toes.
Can't wait to see the next installment...
On my way in a bit to do my elder-care for my friend Lynne. At least it won't be so hot today and we can sit outside to help pass the time.
Take care my Friend.
Sue

I think you need to right a Sit-Com for TV Sandra, you and Bob are funnier than Lucy and Ricky LOL!

The valances look beautiful and really do brighten everything up!

New window treatment can make such a difference in a room.

I just love this post. Well, I love all your posts. I just cackle and cackle like an oversized hen because it's so funny. You should go to the open mic night at a comedy club and just start talking!

great dialogue on the part of you both, of course, you are writing the missive and yes the new sheers look fabulous. I guess we are in for a good "part 2" of the saga...

Hanging curtains is never an easy task which is why we decided not to buy or hang any in this mill apt and bring on the top floor we saw no need. We prefer the unobstructed river views.

i truly love the new look! it does look so nice and bright!

Wow, that was quite the project!
Oh no, seeing dust is not my friend!!!