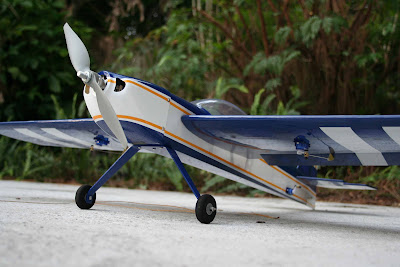 In April of 2009, my husband  put this plane together and I took photos and he put it up on the shelf because he did not have the right electronics to go inside of it.  Note: my husband rarely crashes a plane
You would never guess what he did. Jinx lands in the tip top of an Oak tree that is about 100 years old, so you know how high and big it is. Bob gets in pickup truck, drives 2 blocks to the FIRE STATION and has the nerve to ask the fireman at the door if they will come get his plane down. (jinx is no good and we know this, but the electronics on it are valuable).
The Fire Truck and 3 men drive 2 blocks and try to reach it with the bucket, NO DEAL, Jinx will not cooperate, way to high for the bucket. Do they give up? NOT! they go back to the fire house and get a pickup truck that has a ladder for high rise apartments and put it up in the tree and rescue Jinx!
When he came home and told me this story, I said you are kidding me, You Asked??? They Came??? you and they used our tax payers money to rescue a plane? he said it's their job, they rescue cats!, I said
Cats are alive!!!! Jinx is not.....
Posted by MadSnapper at 12:30 AM

So I am thinking this is Not Friday fiction, it is TRUE. But whether true or not, it is a darn good story!

I just read this to Phil, and he laughed so much that I could barely get through your story. He is STILL laughing.

Hari OM
...and it is also not Saturday, but very much FRIDAY so all is well!!!

Sandra - I loved every minute of this and it qualifies fully for FFF - I know Ginny was concerned it was not 'fiction' but the point is to tell a tale about one of your images and tell it creatively, entertainingly, and maybe with a little bit of artistic licence. JOB DONE!!! YAM xx

Great story! I 'm guessing the firemen enjoyed the challenge... it was good practice for them. They could have said no.

what a super story!! and we love the plane... the mama would love it, but she needs a plane with a cam to spy at the neighbors LOL

We loved that story. Mr B would particularly love that story. He used to fly model planes (or rather built them and then his father flew them because they were "too valuable to have a child let them go out of control"). In one story it went out of range, flew right round the church steeple and crashed into the side of the grocers, right beside the door. It missed all the shoppers but they were standing around looking at the pile of splinters and Mr B's Dad and friend sneaked away quietly rather than admit they had nearly injured anyone. He eventually got the plane back as a box full of kindling wood.

So now I'm wondering if this is a true story or total fiction. Whichever it is, I enjoyed it. I can see a guy going to a fire station to ask them to rescue his plane and I can see guys being willing to do it too.

What a story! LOL

True story or fiction, I enjoyed your story. I can see a bunch of guys who all love their toys to go and rescue another guy's toy plane.
Have a great day and a happy weekend!

Thoroughly enjoyed this! Iyou told it well, almost for me like being there. Good practice for the firefighters! Good of them to come out.

What a story! WOW...Firemen know the meaning of serving and protecting.
Protecting Bob from bodily harm should he have decided to climb up.
Hugs Cecilia

As you know, Tom is similarly smitten. So I'm saying TRUE! This account is hilarious, and I can't wait for him to wake up so I can share this with him.

I'm thinking this is TRUE!!! Boys and their toys...

I think your fiction could really be true..Bob is just gutsy enough to do that and it probably was a battle between Jinx and him for quite a few years..
Love it any which way!!!
Today it's "promised" to be 104F...of course its my Elder care day...
All ready hot and the AC is cranking at 9:15AM
Think of me and I'll think of you and all you are working on too.

My husband flies those planes too and I UNDERSTAND!

I don't really care if it's true or not, it is priceless!
Plus, it made me giggle!

That is one awesome story. I can't believe he went to the fire department for help. Way to go Bob and way to go Fire Department!!!

I can just see the firemen with nothing much to do, so glad another dude came and asked them to help.

I loved this story, Sandra. I have called emergency workers here in our farming community to bring their cherry pickervan to rescue Shadow who was in a tree, in the next door garden with 11 dogs baying below! I have checked on my blog posts and all your comments appear. I wonder why you cannot see them. Thank you for visiting my blog so faithfully. Have a great week. Jo