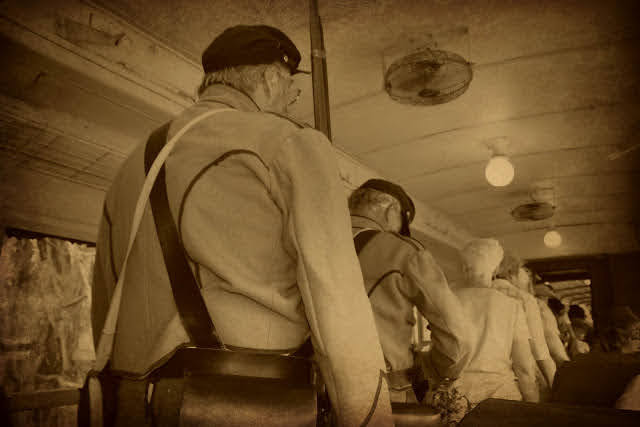 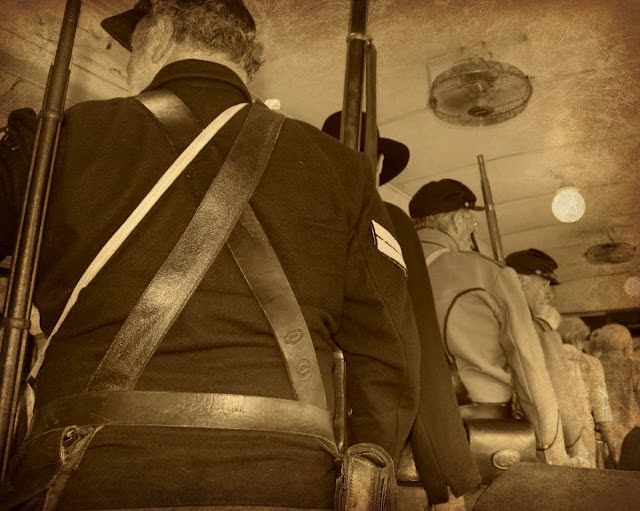 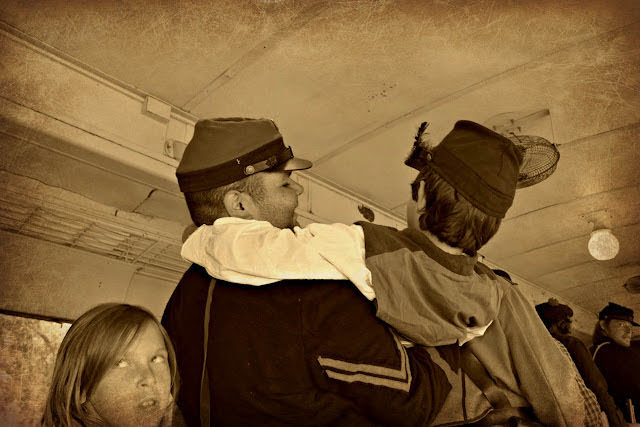 As the train left the battlefield, I had changed my seat to the other side of the train, which meant I had a view of the ramp and the field hospital. 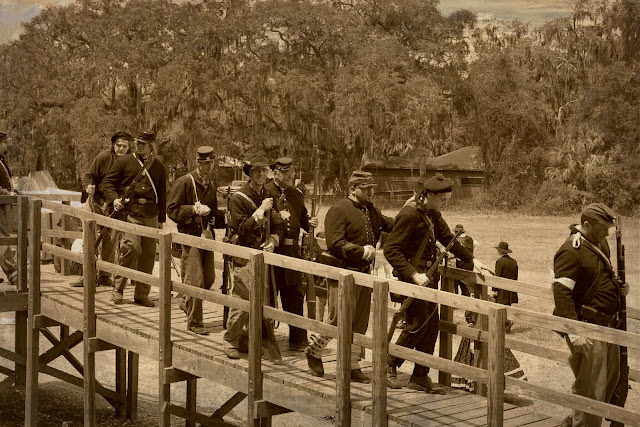 Leaving the train down the same ramp the soldiers had used, staying back out of the way, 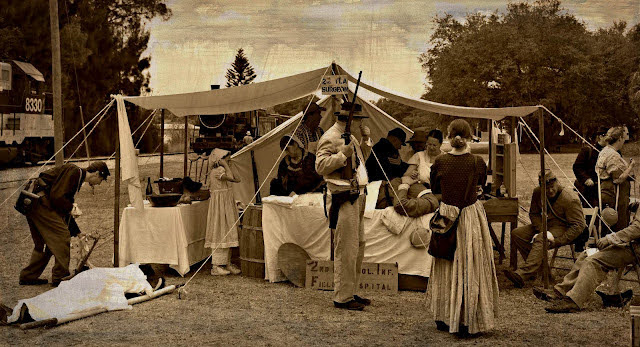 I watched in horror, hearing the screams of the man on the bed under the tent
as they began to saw off his leg.
The man in the chair was crying out for help. 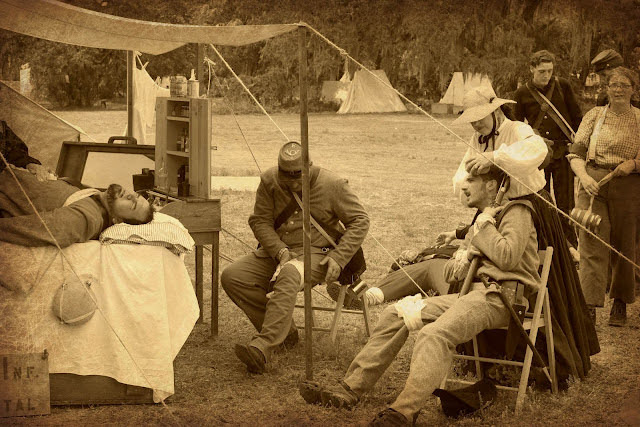 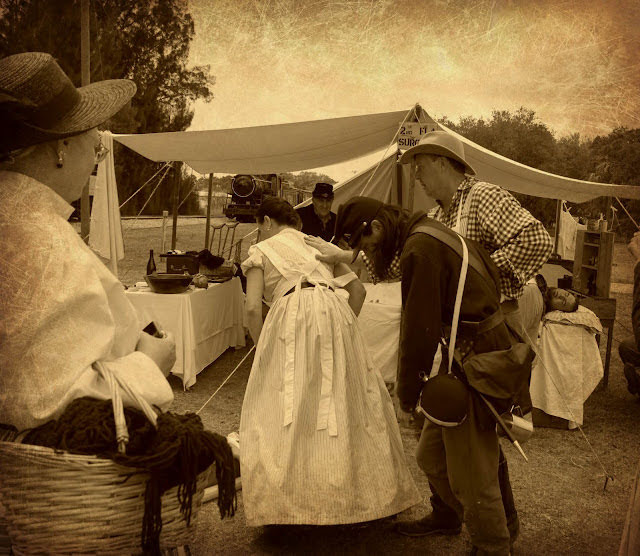 As I watched the air was filled with crys, and sobs. The man under the tent suddenly screamed and passed out, the pain to much to bear. 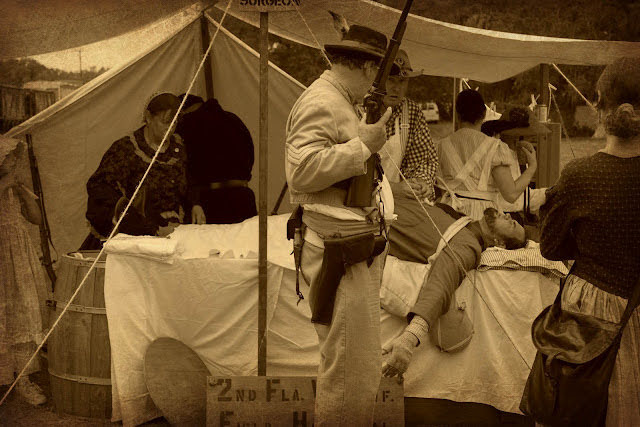 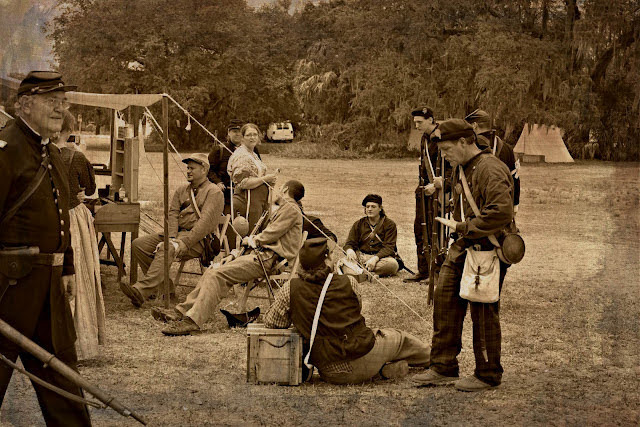 A woman in a plaid skirt stood looking down at her two sons, one would live, the other one was gone, to feel pain no more. 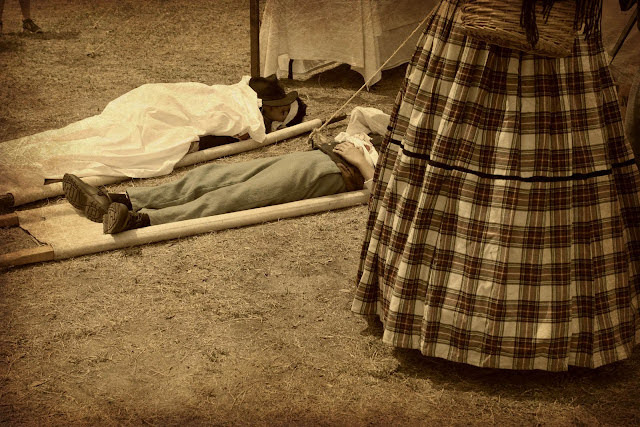 This is the end of my saga of one battle of the deadliest conflict our nation has ever seen.
This is the story of a re-enactment and not the real thing, but to all appearances it was real.
The war raged for another 2 years, ending on May 9th, 1865.
Brothers fighting brothers, families torn apart, a country divided, almost exactly as our country is divided now.

These people seem like they are just the best actors!!! They make it real.

That was a gruesome war. 🥲 But your pictures are great.

...and what an action-packed adventure it was!!

Wow, I am not sure if I would like the screams and crying. That is too real.
They are great actors. I hope we never have such a deadly battle in our country or anywhere. Take care, have a great day and happy new week!

Hari OM
Well illustrated, Sandra - a fabulous remembrance; and still, as you say, we find reasons to separate rather than unite... YAM xx

Interesting time in history for sure. I come and go with the re-enactments. It keeps history in front of us, which is important.....but I sometimes also wonder if it keeps the anger between the North and South alive. For years I visited lots of grave yards photographing and documenting Civil War graves, then switched to graves period.

And right you are about how divided we are today, almost along the same lines...apparently slow to learn.

Their portrayal of the events were amazing. I wonder how long they had to rehearse for it?
Hugs Cecilia

620,000 souls ... most, I imagine, still in their teens. You are a master story-teller, my friend. Have you thought about sharing this with the tour company?

Startling color ending to the story..excellent.
What a deadly war that was enacted so beautifully.
Thank you for giving us a first hand look.
Through out history division has been proven to be deadly. No different than now I'm afraid.
Sue

I often think about the wives and mothers that see their loved ones go off to war.

Hello Sandra, You did a splendid job of creating the right atmosphere through your words, and
camera shots. Well done Sandra.

I remember seeing a series called NORTH AND SOUTH, which I enjoyed, but saw the tragedy of families divided, and unfortunately nothing much has changed.