Merriam-Webster's Word of the Day 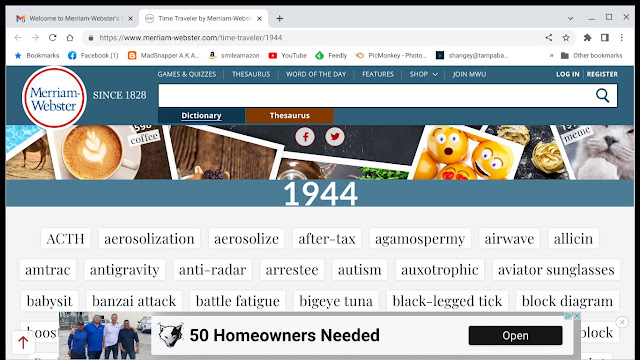 Searching for different meanings of wordsmith, I found I liked Merriam-Webster's definition

Noun: a person who works with words, especially a skillful writer

I clicked Yes to receive the Word of the Day, by email.

Instant Reply to welcome me and introduce me to what they have available appeared
and the first thing I saw was
TIME TRAVELER
and with a wooo hooo I dove into 1944, the year of my birth.
Shocked, I say shocked to find out I was born the same year as the word babysit

Next I read through, Understanding Conjunctions because I could not even remember what one is or was in 1944 or now or any other year.

My brain fried as I read, Understanding Conjunctions and I quickly moved to Words Commonly Mispronounced and as I stumbled through/threw I found this comment.

English is famously difficult to spell!

The state of English spelling is partly due to the mongrel nature of the language (it’s essentially a product of Anglo-Saxon aka Old English, Latin, Old Norse, and Anglo-French), and partly a consequence of longevity;

English is more than a thousand years old. 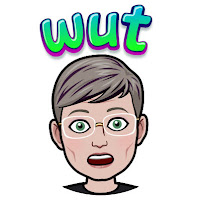 ?????
Does this mean in Biblical Times there was no English Language?
I got to primer/primmer and the things went
awry which looks like awwwry but is pronounced 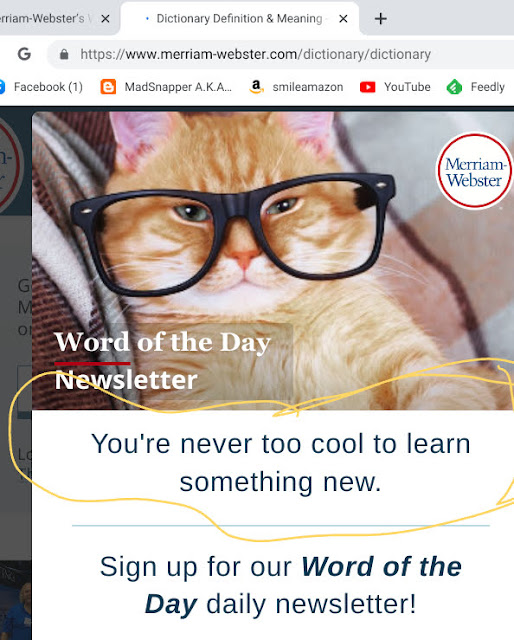 HERE
Now if creating, reading, emailing, posting and commenting, is not enough, I can always Read About Words.             Plus look at cool looking cats with glasses.  Remember, You Are Never to Cool To Learn Something NEW!

I do so hope that I am a life long learner.....
That's what Sabrina said about Louis Dean long years ago.
But it takes me a long time -I am so slow to figure things out. Still, I try to stay in the game.
So, Sandra......what edit program do you use? I am in need of one to watermark the pics I use of the quads. And to make my headers....
You would be shocked at my ignorance of what you seem to know by heart!
I feel like I am an elephant in today's technology! However, I do have a smart phone! Does that count??

You are so right! And now you have this really cool subscrption to keep us informed! What a studious cat!

we love what you found out... we think the peeps from bible never spoke french either, as difficult as it is, the bible would be a picture book then... ;O)))

Hari OM
Yup, English is far from ancient - and is in constant flux! YAM xx
(ps, just remembered you asked about screen video... when you open the capture image option, there is a toolbar at the bottom of that dimmed screen, and you select the little video camera icon to change from photograph to film. Once you've selected the are to be used, press the record button. To stop filming, press the button again, which will be sitting on the task shelf. Yx)

Not only will you be learning new things but you'll also have daily blog fodder if you don't have anything else to post about.
Looks like they make it fun to learn new things as well.

Next thing you know, you will be constructing crossword puzzles!!!

It is good for the brain to learn new things, that includes new words.
I am usually very good at spelling, but I am definitely not a wordsmith.
Take care, have a great day!

I have been getting the word a day for years...I just cannot remember them!

What a fun find!
I love stuff like this but have to admit, my eyes started to glaze over at that paragraph following "English is famously difficult to spell!".

It's good to learn the correct pronunciation of things -- but I'm a little sad that I'll likely never have a chance to use 'Ragout' -- no matter how delicious it looks. One of my FB friend's has this quote as his background picture: "Never make fun of someone if they mispronounce a word. It means they learned it by reading." Isn't that cool?

As you know, my work at NCSU involved many many international students. Many often spoke several languages but most always said English was the most difficult to learn
Hugs Cecilia

I am signing up for the word of the ay - learning things like that I just love. No English when Jesus was around.

I too signed up for the word of the day..I'm like someone else said ..Love learning new words but just can't remember them..
Love how you delve into things you don't understand. There's a lesson in there for me!!
Survived yesterday, it really wasn't too bad but I'm glad it is done. We were able to be out in the morning for long periods of time, but as the day wore on, she would want to go out...so we would..she would sit down and say it was too hot and we would go back inside...over and over again..But...it gave her exercise and killed some time...gotta find the positive. Going back Friday for my weekly visit but it's only 4 hours so it should be fine.
Sue

There are not enough hours in the day to satisfy my interwebs dumpster diving habit! LOL

I think you lost me on this post. Too much information! Laugh out loud!!!

Got one for you... get ready to groan.
Isn't a Conjunction the place where the bad guy catches the train?

Maybe that is way over doing the definition a little. lol

And now I learned something new today from your post, Sandra. As you know, I am hardly at a loss when doing a long post because I learn so much online and want to share.

Merriam-Webster is my go to! I did not know about the word of the day. Thank you for sharing, Sandra!

This is great and you are right, never too old to learn. I used to live in a place called Wednesbury (pronounced Wensbree). Our town used to be called Wodensborough, which was something to do with the God of War. I'm going to have to investigate that more. Thanks for sowing the seed. You have some great subjects in your posts.