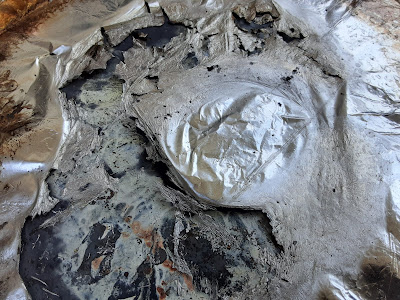 Can you guess what the above is? 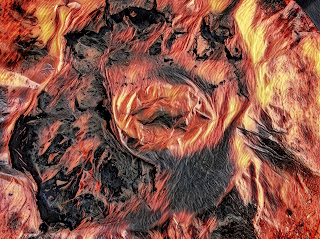 Now can you guess?
It was a fire in the kitchen. I keep Covers on the back burners to keep Bob' s Breakfast Grease off the burners. They were so greasy, I cleaned them and put Tin Foil on them, because I could easily rip it off and throw away.
He makes a terrible mess.
I turned on the front burner to boil eggs and lucky for me did not leave the kitchen, while putting away supplies I smelled HOT and behold the foil was flaming. I turned on the back burner.
Nor the front burner I had the pot of eggs on.
The bacon and sausage grease ignited!
No I did not  use the afore mentioned Fire Extinguisher ,
I turned off burner, remove black smoking cast iron griddle, the flames went higher, my heart beat harder and I smothered it with a huge lid, used tongs to pick it up and take out in the yard and say to Bob.
While you and Beau play ball, I am burning the house down!
Just so you know the flames above were added in Lunapic. I did NOT take photos. But I did nearly have a heart attack.
This reminded me of the time our front lawn was not doing well, and I heard that burning  off  the dead grass would make it grow back really well.
The only thing that happened, is I forgot i had two boys that would walk through the black yard and into the house on carpet....this was 1975ish.
Oi Vey
Posted by Sandra at 12:30 AM

Wow, you were calm under fire, thoght logically, and were brave!! Glad all is well.

Hari Om
... good grief - I was dreaming about fire in the/a kitchen two nights back!!! Channelling ya! Thank the lord you are okay. YAM xx

Dementia or not you seem to have it well under control, and i did have a chuckle about burning the lawn! On the cooker issue we have moved to induction cooking - speed of gas, no flame, smooth glass top for easy clean and no hot elements where things get turned on by mistake. (A friend of my Mum's advised me to start dementia proofing home years before you think you'll need to). As for the lawn - dethatching, fertilizer and water work quite well to revive even ancient lawns.

It seems like you kept calm and took care of that fire very well. Sometimes I forget to turn the oven off, hubby will come behind me and turn it off. I am scared about fires. Tigger in the comment above has a good idea about the induction cooking. I am glad all was well!
Take care, enjoy your day!

You sure did keep calm under fire. Not a fun thing to happen...I would have been weak after I got it out...

Lordy Sandra! Your life is full of adventure.

Glad all was ok in the end thanks to your auick and calm thinking, Sandra. Hope you did get the eggs done for your breakfast afterwards.

Such a good thing you thought fast and reasonably (see it's not dementia), but it is scary! You had my heart racing just reading along.

O.M.W.!!! I've seen these memes on FB about turning on the wrong burner, but never thought about grease residue. (Tom's the same way.) I'm trying to visualize this and wondering how you kept from being burned reaching across to turn off the burner. A kitchen fire's something I try not to think about ... but really should.

PS - Sorry, but I laughed out loud at you going outside and informing Bob you were burning down the house.

Oh my word that had to have scared several seconds off your life
I never EVER leave the kitchen when the stove is on. Once I forgot to turn the oven off when I was making toast. All of sudden we got a whiff of a unusual order...Thank goodness we were still in the kitchen. Since that time whenever I broil I put the timer on for 10 minutes just in case.
Hug Cecilia

Oh my goodness you were lucky it wasn't any worse. Things like that happen. I have seen people put their grass on fire - didn't know why - so it didn't work?

Oh my goodness, just shows you how easily these things happen. Glad you managed to deal with it.
Briony
x

Very fortunate that you were right there to stop the fire from spreading.

That's a mistake any of us could have made, and you handled it well! Get some exercise by patting yourself on the back.

A scary title for this post. So glad you got it under control. I also read about you Ninja air fryer and all the rest it can do. And, of course, I loved hearing your voice.

You got this under control quickly. Good for you for keeping a cool head.

Easy enough mistake to make, turning on the wrong plate on the stove. I do try to remind myself not to leave the kitchen while I'm cooking... Good thing you didn't! :)

Glad you were right there. It’s easily done. Turned on the wrong plate myself a few times.

I'm glad your okay. That was scary. Glad you were in the kitchen. I think we both learned several years ago that we don't leave the kitchen while boiling eggs!