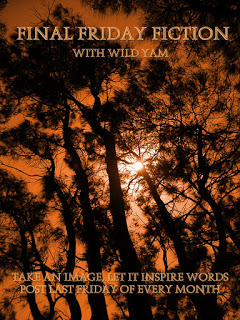 Joining Yam for Final Friday Fiction
You will find the RULES here, if you want to join in. 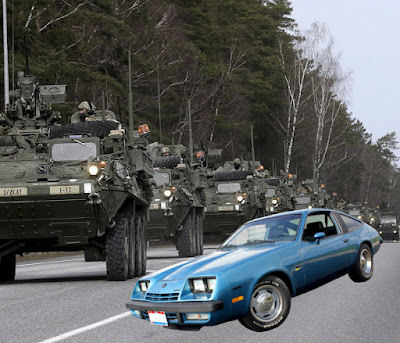 The Convoy
My hands clutched the wheel of my 75 Monza so tightly, the knuckles were white, as I kept pace with the fast-moving traffic on Abercorn in my hometown of Savannah.
As I glanced at the man in the passenger seat, I could see the fence keeping us away from Hunter Army Airfield. the man in the passenger seat was my husband of only a few weeks, so drunk he could barely sit up. He had consumed a full bottle of Mad Dog 20/20 in a short time. As we approached the crossroads of Abercorn and Montgomery Cross Roads, I saw a military convoy, a long one approaching the intersection ahead and realized there was a line of MP's holding up Stop signs, to allow the convoy to drive through without stopping.
I was the first car in a line of long traffic, and as I applied the brakes to slow to a stop, my husband slammed his hand on the glove compartment release and reaching in pulled out a pistol. Waving the gun in the air, first towards me and them at the MP he kept yelling "If you Stop, I will shoot you and that MP" over and over waving the pistol wildly.
With split seconds to make a decision, my heart beating with the adrenalin flush, I slammed the gas pedal to the floor and roared past the gaping MP, who turned and watched us as we flew down the street. For the first mile, I could see him waving his arms wilding and yelling.
I could hardly breathe, as the Mad Dog in the passenger seat continued to scream, if they come after us and you stop you are dead and so are they"
They did not chase us and as I tell this story, I am alive and typing, which means he did not kill me.
A few miles down the road, still waving the gun, he demanded I pull over and while he leaned out to throw up the Mad Dog 20/20, I waited in fearful silence and putting the car in back in gear, I followed his directions to a nearby liquor store to buy yet another bottle,
The Convoy was not the first or the last time I stared into the barrel of his gun.
Posted by MadSnapper at 12:30 AM

holy god what a horror trip... that would be a nightmare for me... and for all ... hugs to you that you are free now and you never ever have to look into the barrel of a gun....

You sure knew how to pick 'em back then. Thank goodness Bob seems normal or you wouldn't be here to share these adventures! (And who would be Beau's Mam if the Mad Dog had put an end to the MadSnapper?)

Wooooowwww that picture on Beau's blog makes you feel like you are going to fall over backwards. It made our eyes go funny!

Mad Dog is one crazy character! The combination of guns and alcohol usually end in tragedy. What a story. Take care, enjoy your day and the weekend!

This, I hope, is fiction rather than fact. It gives a whole new meaning to driving under the influence! Influence of a madman that is.

Hari OM
...this is jaw-dropping reading, Sandra... full FFF marks for the courage to tell it and for writing in such a way we want more!!! YAM xx

Oh my word. How incredibly scary. I can't even think of what I would have done in that same situation.

I think you might have missed your calling! This really was something I could not have stopped reading if I tried.

Totally scary today. First the surely acid-trip inspired image of Beau, and then this terrifying FFF. It was fiction, right?

That sure was a heart stopping story and, like the other comments, we hope it wasn't a true story.

Well, I for one, suspect this is a true story. My thoughts are leaping like ping-pong balls, aghast. Given tragedies of the last several years, I'm surprised that MP didn't open fire.
Maybe Kelly Clarkson said it best, "What doesn't kill you makes you stronger."

OH MY WORD..............I too am surprised the MP's didn't give chase. YIKES. I have never held a gun much less stared into the barrel of one.
Thank goodness you made it to the happy side of life.
Hugs Cecilia

The way you told your story took my breath away. And I agree with the above commenter who said she wants more. On any subject. You have something special when it comes to telling a story. Awful subject here, but what great storytelling.

Whew...you had me holding my breath in your story.
You are a master story teller!!!
Since this is in a fiction post, I have feelings that there are shades of truth to it. I know you love thrillers so....???
Good stuff!
Sue

Just read your comment you left for me atHootin' Anni's...OMG Sandra!!!!!

That was a scary story but a great read!