1863, The Confederate Army in Florida is under attack 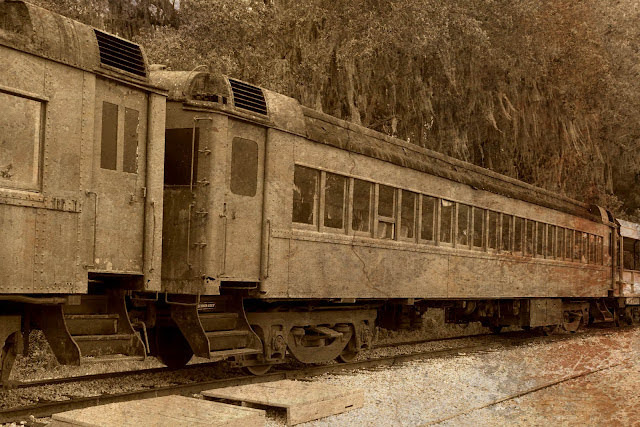 It was a hot day in April 1883.  The train rocked and the sound of clack clack clack, clack clack clact filled my ears as the Johnny Rebel soldiers walked from car to car.  The car I was in rocked side to side, I could feel danger in the air.  The puffing steam and cinders mixed with the smell of Gunsmoke puffed in the open windows.

The distant sound of gunfire was a steady background of noise. 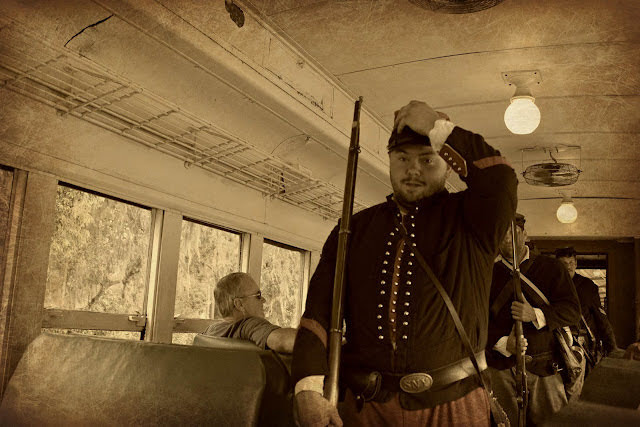 The soldiers of the 2nd Florida Volunteer Infantry were ready for battle, even the very young that were still in their teens were ready.
The Confederate Army was under attack from the US Army and needed assistance quickly.
Both sides were falling to the ground by the dozens. 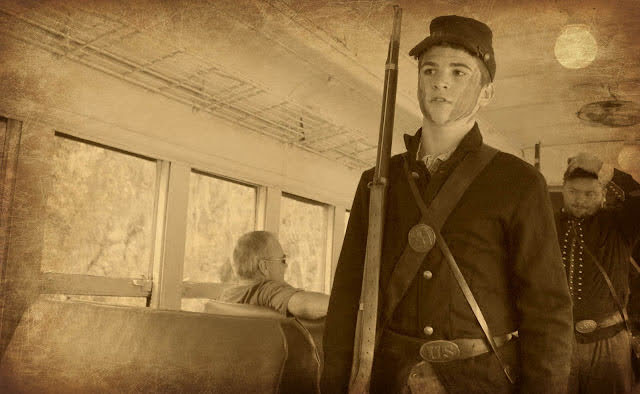 I had watched the Volunteers board the train and ducked into a seat behind two ladies hoping heir wide skirts would hide the fact I did not blend my clothing of capri pants and t-shirt with DSLR Camera and its long lens. I hoped they would not notice I was from another time, April 2012.

I huddled by the window, they both stood, the woman in the white shawl poined out the window .

Look, there they are, Look can you see the battle? 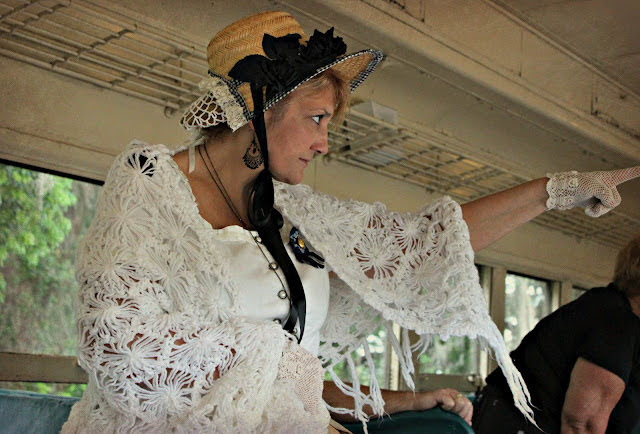 The other lady started for the back of the rocking car. 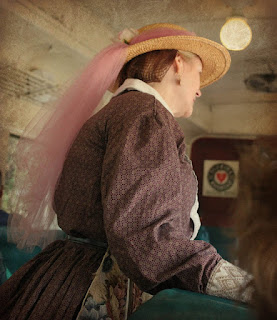 I turned to the window, the smoke was thick, the sound was fierce 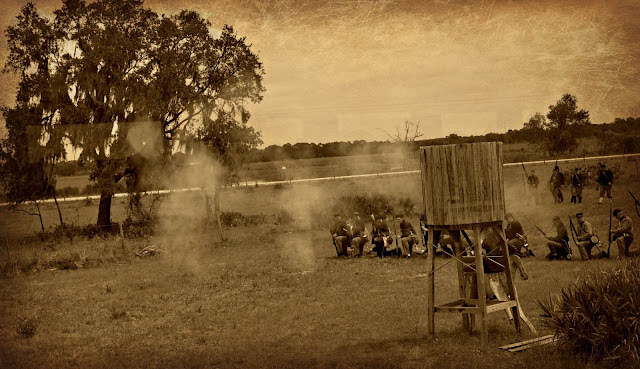 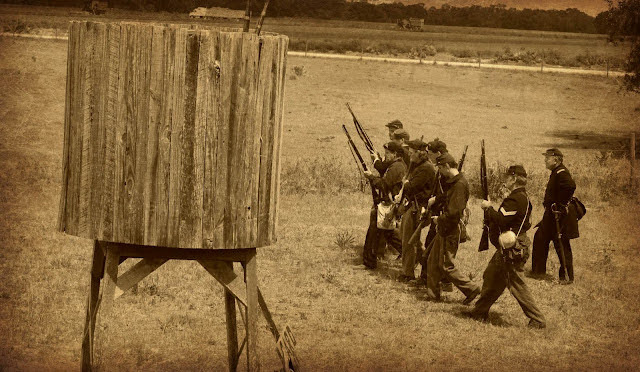 Snap! just as he fired 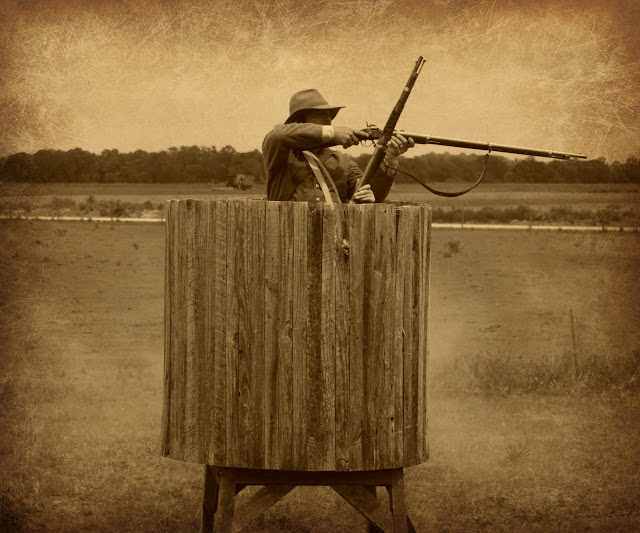 ]
As I fired my camera madly, I screamed NOOOOO! He's Hit. 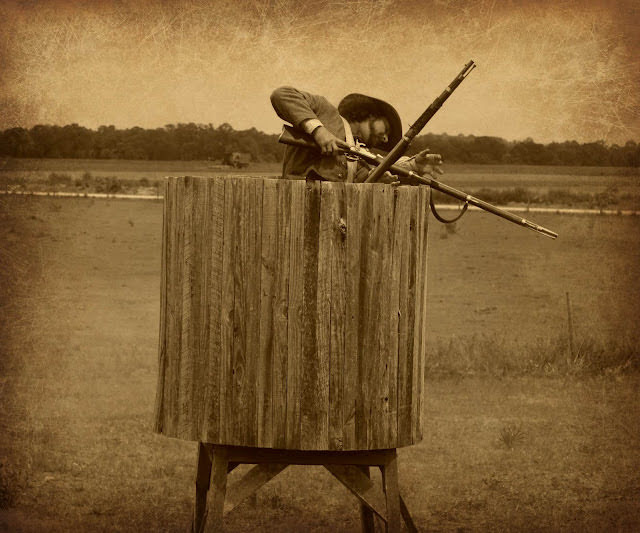 I love how you have made the shots look old, but still in great shape. And especially the way you did the color with the two women on the train, it is beautiful.

oh my that is thrilling... and we wish we could be there ith you to be a part of this super story...

I can feel the excitement. These photos are great. They make you feel like you are right there in the middle of it.

Love the photos, I like the soldiers on the train and water tower images. Are these sepia images? Take care, enjoy your day!

...and the bloody battle begins!!!

I think you should try writing a book.. yo ui have us all hanging on to every word.

Hari OM
...and I say again, you are a shoo-in for FFF magnificence (think a week tomorrow and I expect great things!!!) This is edge of the seat stuff... YAM xx

Love your sepia treatment of these photos!
I've been (rightly) accused of romanticizing the Confederacy, and can't say why. Not sure if I'm more off-put by the loss of life or lack of hygiene. (jk!)

I cannot imagine all those clothes in the heat. However, it is a true re-inactment of the times when the folks lived
Hugs cecilia

I have never seen a reenactment - but I live in Kennesaw near where the last battles were fought - there is a lot of Civil Wars artifacts here tho.

I love this! Your “old” photos are wonderful!

I can feel the tense atmosphere and the photos take me back in time.
You have a real way with words that made me hang on every one.
An unusual take on "The War".
Sue

Those photos are impressive, especially as you have given that old feel to them to match your story. Looking forward to its continuation.

Hi Sandra, :=) What an amazing story, and wonderful sepia photos. Compelling reading. Your way with words makes me want to know what happens next.

Riveting! Now on to the next episode, living out some more Deep South history while sitting in Coffee Fusion with Hubby and my computer. Oops! Hubby just said time to go! To be continued!

photos are awesome. You are so talented.