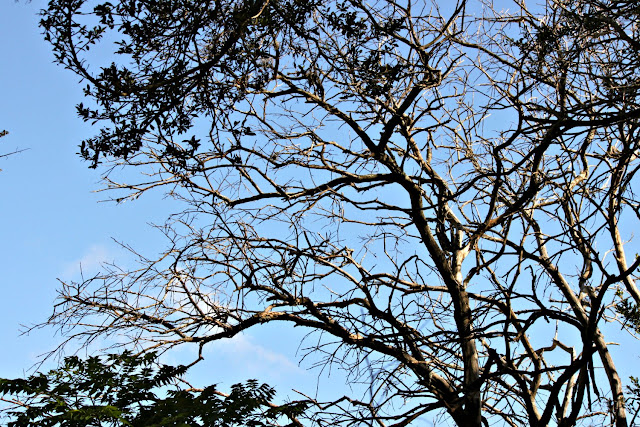 Our Grapefruit tree died during our 4 year drought, this is part of it. A man with a ladder and a saw knocked on our door and said "I can take down that dead tree for you". I said "no thanks, I think it is beautiful! He shook his head and said "You think its Beautiful? It's Dead! 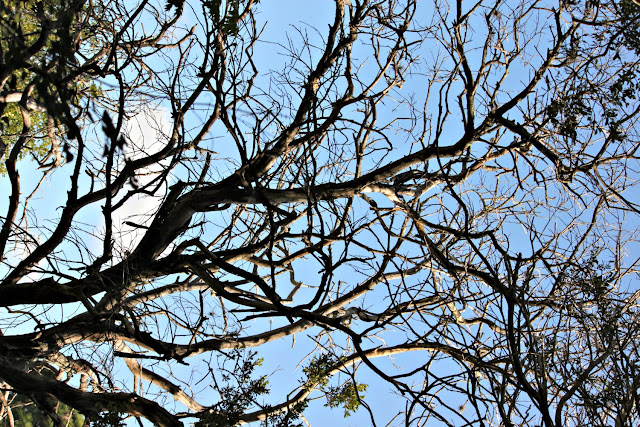 I told him my husband planted a Ruby Red Grapefruit seed in a paper cup, in 1986 when we lived in Saint Petersburg. It grew to about 6 inches tall, he planted it a planter. It was 4 feet tall in 1989, still in the planter. We moved it here and my uncle laughed his head off and said It will NEVER have fruit. 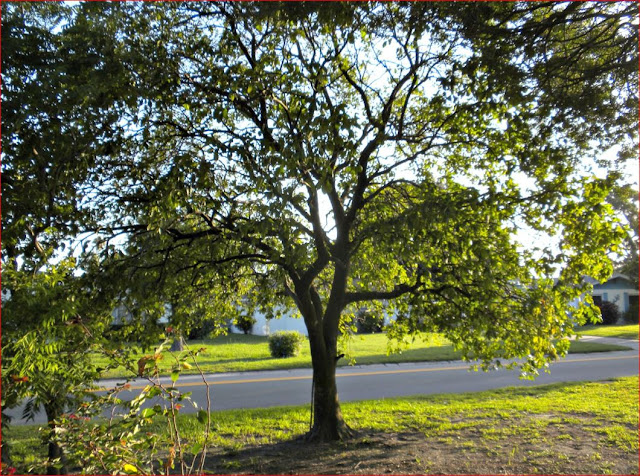 We and our neighbors had thousands of grapefruit from that tree. Everyone knew they could pick what they wanted. Until 2017, it up and died.  We were heart broken.

What a story. Bob should have been an arborist, or a horticulturist!

Bob sure has a green thumb. He should have owned a greenhouse or a tree farm. I never even got the pinecones I picked up in a pot of dirt. They are still sitting on the counter with my fall scarecrow

I tried an avocado down here in texas, it froze.

Let him laugh … I think those stark tree limbs are beautiful. And what a great reminder of the bounty it provided! (We love grapefruit, but I don't keep it on account of Tom's blood pressure medicine.)

I didn't know that about planting a pine cone! Maybe I'll remember to pick one up when I go to work this morning and bring it home.

Patience paid off and you and your neighbours enjoyed the grapefruit. Shame that it died. I think you might have to plant individual pine seeds if you want to grow a pine tree. I've never tried that although Hubby does grow some fruit trees from seed and after a few years we have had results.

I agree, some dead trees look like art. I hope your pine grows!
Enjoy your day, have a happy weekend!

How interesting. My hubby had a grapefruit seed in a little water in a glass this week. I guess he needs some dirt! I love pinecones!

Wonderful story...I would probably be like you and want to keep the tree.

Hari OM
as long as it is not at risk of falling over and causing damage or harm, let it be! good luck little pine cone tree... YAM xx

I hope your pine grows! I wish I had a Grapefruit tree ... but it is not growing in our climate. I will also say that I want to keep the tree, but it is dangerous, the branches can break from the first gust of wind.

Have a nice weekend!
xoxo

I am not sure about the pine tree - why not grow more grapefruit trees too?

Wow that grapefruit tree had a long and happy life and look at how tall it got. Oh I don't want in more pine tress here. WE finally got all of our giants cut down. They are scary in ice storms and high winds
Hugs Cecilia

I would love to have a grapefruit tree here. Neither Dave or I are suppose to eat the fruit though..I guess it fights with the BP meds. So sad because I love it and used to eat them just like an orange.
Good luck with your pine tree. Since Bob has the magic green thumb there may be pine needles in your future.

We think your grapefruit tree holds way too many memories to be cut down!!

Obviously that man does not have an eye for beauty.Many a dead tree is as lovely as one full of leaves.

What a wonderful personal tree history.

That's sad about the tree. Could it be an issue during a hurricane branches breaking off of it? I saw that idea with the pine cone from Ann. I'm waiting to find a fresh one. I don't think it will work with the ones I've had in the house for many years.

Sorry you lost your tree. We have a huge pine tree in our yard. It was tiny and stayed that way for years, then I guess the roots hit the water table and it shot up.